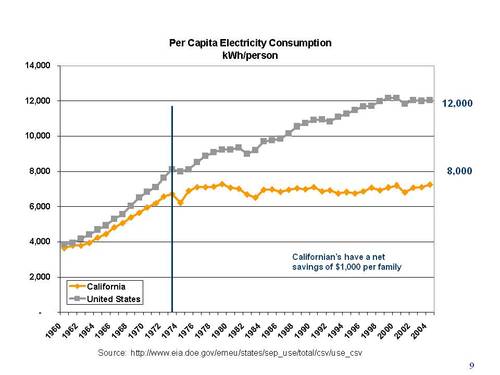 Design and distribution are fundamental and powerful parts of marketing. How powerful? In regards to America’s energy needs, they can provide power for our next 100 million citizens–no new fuel source or technology required.

Stay with me for a little math and I’ll show you the possibilities.

The average person in the U.S. in 2011 used 312 million BTUs or MBTUs per year. BTU stands for British Thermal Unit. It’s the energy needed to raise a pound of water one degree in temperature. Think of a BTU as a big calorie.

Compared to this national average, Californians and New Yorkers have very low per-capita energy usage. The average Californian uses 210 MBTUs per year; the average New Yorker, 192 million. These states use so much less energy than average in part because they have regulations governing the energy efficiency of buildings, appliances, motors, and other devices. (The line on the chart included in this post represents the year California passed their energy efficiency regulations.)

What if we could reduce the energy usage of the other 48 states to roughly that of California and New York, say 200 MBTUs per person per year? Going from 312 MBTUs to 200 frees up 112 MBTUs per person. Hold on to this number nugget for just a second.

So now let’s look at the U.S. population. The U.S. has 313 million people. California plus New York have 56.5 million.

If you subtract California and New York from the rest of the population, you get 256.5 million people. Those people are using roughly 312 milllion BTUs a year on average.

So here’s where I put this all together: 112 MBTUs divided by 200 MBTUs equals 56 percent. In other words, the reduction from the national average energy consumption to the level of California and New York would save 56 percent of each person’s energy use at the new, lower level.

In the U.S., we’re already producing and distributing enough energy to meet the average need of 312 MBTUs per capita. AND, we’re already designing the energy efficient products and practices to drive two of our largest states and their economies using much less energy.

If we just distributed those same designs to the other 48 states, we could start making energy available for many more people. No drastic changes or one-time spending are necessary. Just start today and make the changes as we build and equip new homes and businesses.

Why aren’t we doing this already? I can think of a few explanations. Not everyone agrees that we have a energy problem, or that pollution from fossil-fuel based energy production contributes to climate change and environmental degradation. Some people just don’t understand or believe the math. Others don’t want the government, or other states, telling them what to do. There are powerful industrial interests earning large good profits from the current system.

But in the end, I’m baffled why we as a nation, for the good of our own communities, haven’t taken this proven and no-cost step towards improving our community for ourselves and our next 100 million citizens.

If you don’t live in California or New York, but you’ve visited there or have family in those states, did you even notice a difference in day-to-day life related to energy use?