I recently stumbled onto a trove of free market research data, called the American Community Survey. I wish I would have known about this sooner!

For planning public services, writing grant proposals, developing business plans, planning distribution systems, and more, data like this can be invaluable. And expensive. In my newspaper publishing days, I paid thousands of dollars for market research that included this type of data.

What the American Community Survey Covers

The United States Census Bureau conducts the American Community Survey as “an ongoing statistical survey that samples a small percentage of the population every year–giving communities the information they need to plan investments and services.”

You can parse the data along many different geographical dimensions, such as

Given my nerd tendencies, I can probably get lost for hours in the available data. Here’s just one example: With just a couple mouse clicks, I was able to generate this table of my county’s mean income in the past 12 months, in 2012 inflation-adjusted dollars: 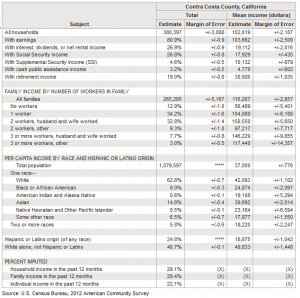 Back up your proposals and plans with data that’s freely available, thanks to your tax dollars.