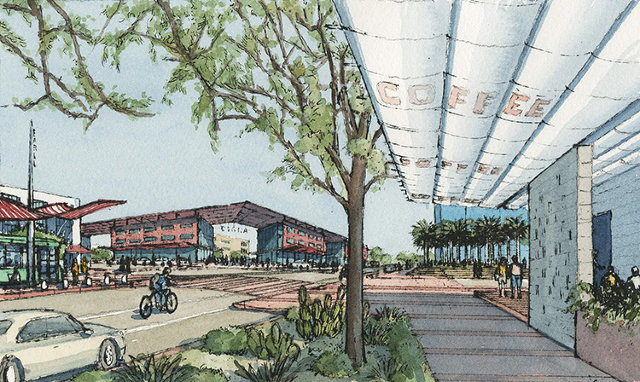 My personal vision of Hell is working as a roofer in Phoenix.

It’s not just the manual labor in the desert heat, for which I’m wholly unsuited. Phoenix is a sprawling metro area, 16,500 square miles of concrete and car culture smeared across the Sonora desert. No thank you.

After the housing bubble burst and created ghost towns of half-finished suburbs rippling outward from city center the into the sandy heat, Phoenix decided to re-design its future. As described in this Fast Company article, my hellish city has built light rail, designated urban centers around rail stations, and updated zoning and building codes to promote density, walkability, and urban living.

In a direct rebuke of car culture, the new codes call for narrower streets. Those streets will, in turn, benefit from the shade cast by buildings, helping to cool the urban landscape. The resulting slower traffic and cooler sidewalks promote pedestrian activity.

The new codes also call for more streetside trees and plants. Phoenix may sit in the desert, but it also sits above a large aquifer. With proper landscape design and management, large-scale urban plantings are workable in the desert climate.

As one of the urban planners says in the article, “Instead of watering and supporting suburban lawns and golf courses in sprawl outside the city, it’s so much better to create this urban oasis for people to come to.”

Change on this scale doesn’t happen quickly. A couple of decades will be needed to convert Phoenix into that urban oasis in the desert. In the face of climate change and its accompanying increase in extreme weather, the new design direction will help Arizona’s largest city reclaim its image as a desirable Sun Belt destination.

I still don’t think I’ll be moving to Phoenix any time soon, but I’m now more likely to at least consider a visit for baseball spring training.