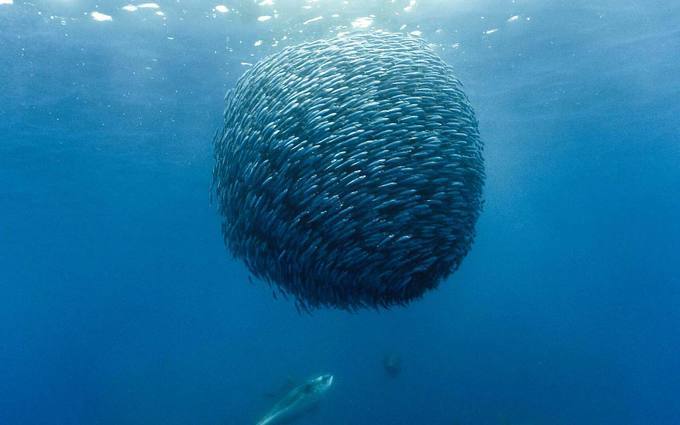 “We should stop and think about how we can use the ocean and not use it up.” –Sylvia Earle

As of the last count that I could find, which was published in 2008, there are more than 400 ocean dead zones around the world.

Since we’re land creatures and an ocean dead zone may be hard to imagine, picture a vast forest fire that burns an area so badly that no oxygen can return.

A dead zone develops from too much nitrogen in the water, which feeds algae that consume all the oxygen in the water, driving out or suffocating the fish, crabs, shellfish, coral, and other marine life. High nitrogen levels result from agricultural fertilizers running off the ground and into the water system. Once the algae drives out the marine life, microbes that thrive in a low-oxygen environment take over, filling the area with toxic hydrogen sulfide gas.

This is a problem of governing the commons for several reasons. The oceans are a vast common area from which we all extract resources, oxygen and carbon sequestration being two resources essential for our existence. Oceans are governed by layers of regulation running from local port authorities all the way to super-governmental bodies such as the United Nations. The waters beyond national boundary claims are often ungoverned and over utilized.

At the same time, our watersheds and farmlands are also commons upon which we depend. The problem of ocean dead zones comes from the intersection of two complex commons, which makes for a complex puzzle to solve.

Like the fisherman of Alanya, Turkey, we need to find a sustainable solution for using our marine commons without using them up.

One part of the solution is protecting critical portions of the oceans to help essential ecosystems survive. Ocean explorer Sylvia Earle is working through her Mission Blue organization to develop Hope Spots throughout the world’s oceans. Today, roughly 12 percent of the planet’s land is protected but less than 3 percent of the world’s oceans. Earle’s drive is to raise ocean protection to 20 percent by 2020.

I think of Earle as the John Muir of the ocean. Muir solidified the concept of national parks, which have been called “America’s best idea.” Those parks led to the protected lands movement around the world.

(Muir loved being in the mountains so much that, when he was at home, his wife complained that he suffered from “low altitude sickness.” If you watch Earle’s Mission Blue documentary available on NetFlix, you can see the joy on her face whenever she’s in the ocean, near the ocean, or talking about the ocean. I wonder if Earle gets “land sick” if she’s away from salt water too long.)

That same great American idea can help protect ocean areas that will, in turn, drive the health and recovery of the oceans overall and also the health of our land-based environments.