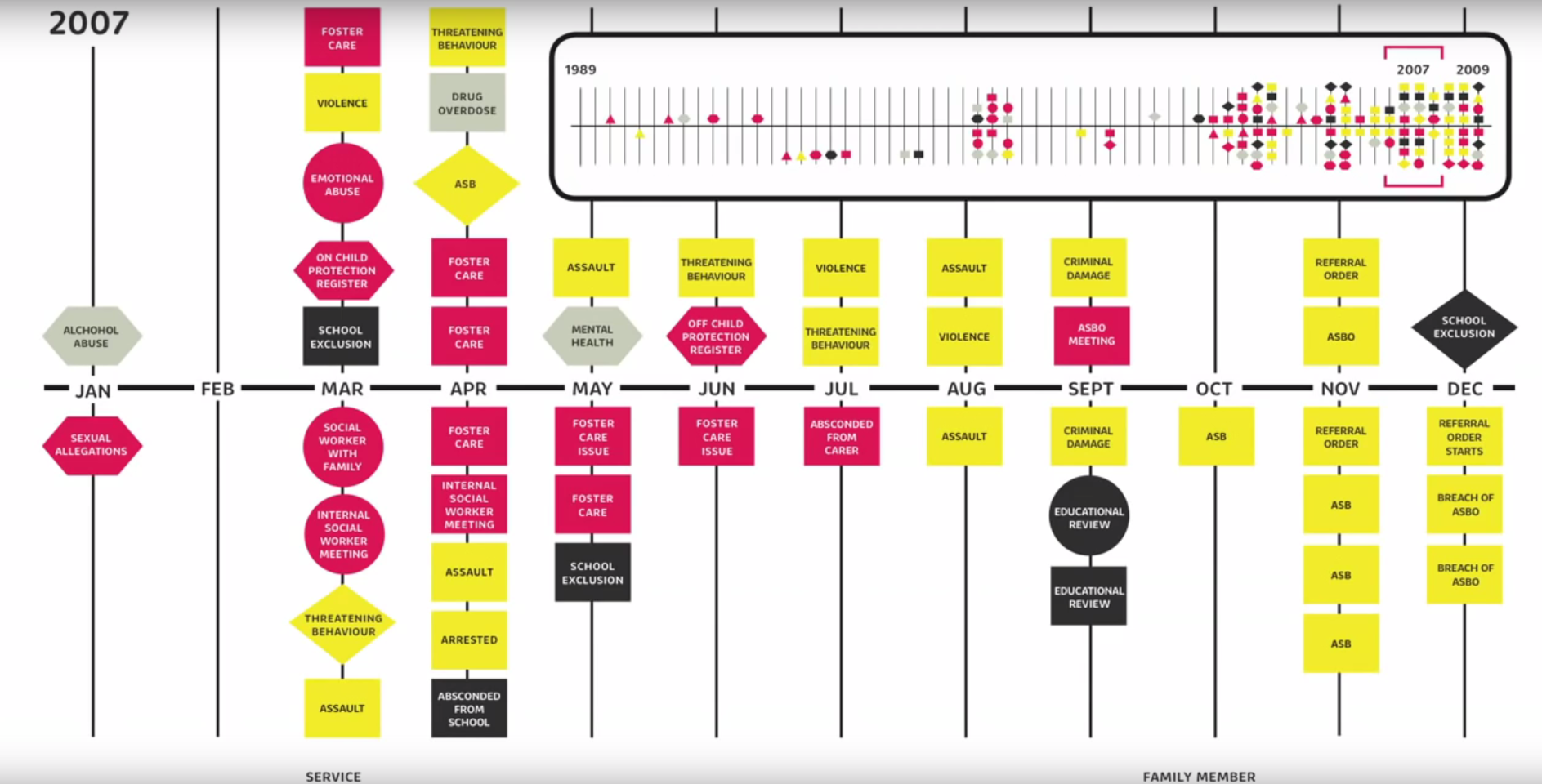 In her TED talk, “Social Services Are Broken: How We Can Fix Them,” Hilary Cottam displayed a chart mapping 20 years of social services interventions in the life of one family (screen shot shown above). Color-coded shapes along two timelines mark each encounter in which schools, police and social services interacted with the mother, sister or son in a family. The inset timeline shows the accelerating nature of interactions with of this social service program design, while the main timeline shows the 50+ incidents that occurred in a single year.

Cottam says that the system depicted in this chart costs the U.K. taxpayers 250,000 pounds per family per year to operate and maintain. You’d think that such a hefty sum would make a huge difference in a family’s life. The length of the timelines shows otherwise. Cottam describes this system as a gyroscope spinning around the family, keeping them stuck exactly where they are.

How does Cottam say that this system can be fixed?

Next, the social workers put the family in charge. Families got to interview social workers to see who they wanted to work with and have a relationship with. Families were also given a small slice of those 250,000 pounds to spend how they chose. They chose to fix up their homes a bit, get some education or training, or start a small business. Some simply went out to dinner so that they could actual talk and listen to one another.

This redesign of the system got families out from the middle of the gyroscope. Ella, the main character in one of Cottam’s examples, participated in the newly designed process. After years on the dole, she finished vocational training and landed her first paying job. Plus, she got all her children back into education themselves.

How had a system originally intended to help gone so awry? Cottam traces the problem back to the Beveridge Report. That influential U.K. government document from 1942 outlined the modern welfare state. The design in that document, Cottam maintains, put an impersonal bureaucracy in place to serve families.

The report broke two key laws we’ve seen in this blog. One, we are social creatures and need relationships to support us, not bureaucracy. Two, you should design with your clients, not for them. In changing the time allotment for social workers and putting families in charge, Cottam’s experiment addressed these two laws, with impressive results.