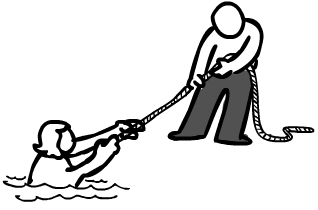 “The roots of altruism and compassion are just as much as part of human nature as cruelty and violence, maybe even more so.”

When she was 19, Abigail Marsh was rescued by a stranger after a freeway car accident. She had swerved her car to avoid hitting a dog. Her car hit the dog anyway, fishtailed,  spun until she was facing ongoing traffic in the inside lane, then died. A stranger ran across four lanes of traffic in the dark to help her. He got her car started and turned facing the right direction. Once Abigail was safe and able to be on her way, the stranger left. He never mentioned his name.

As she reveals in her TED talk, she has never learned his identity. But his selfless act left her with a lifelong curiosity about biological altruism.

Many people and researchers seem to believe that all people are selfish. Yet, like Marsh, we see and experience and commit voluntary and costly acts motivated solely by a desire to help another.

The extremely altruistic may be more rare than the psychopathic, who by definition have far less than normal connection with and concern for the suffering of others. Marsh has also studied psychopaths, in an attempt to find what drives altruism.

Just as we have an innate sense of fairness, it may be that we as social beings are wired to help others in our community. Social cooperation helps maintain the strength and stability of the community, thus improving the group’s chances for survival.

We also have a unique ability for social cooperation that is both flexible and scalable. This ability plus our growing interconnection makes altruism a potent force.

Environment influences the content and expression of our genetic makeup through a process called epigenetics. As our species has more chances to engage in, and benefit from, altruism, this may bend our genetics towards more biological altruism.

Marsh says that, “The psychologist Steven Pinker and others have shown that all over the world people are becoming less and less accepting of the suffering of others in ever-widening circles, which has led to declines in all kinds of cruelty and violence from animal abuse to domestic violence to capital punishment.”

Marsh has found in her research that extreme altruists don’t see themselves as special. They say that they are not unique, that they are like everyone else. She calls them humble. Maybe it’s that they have a greater sense of their social nature. Is this not a description of being a social animal?