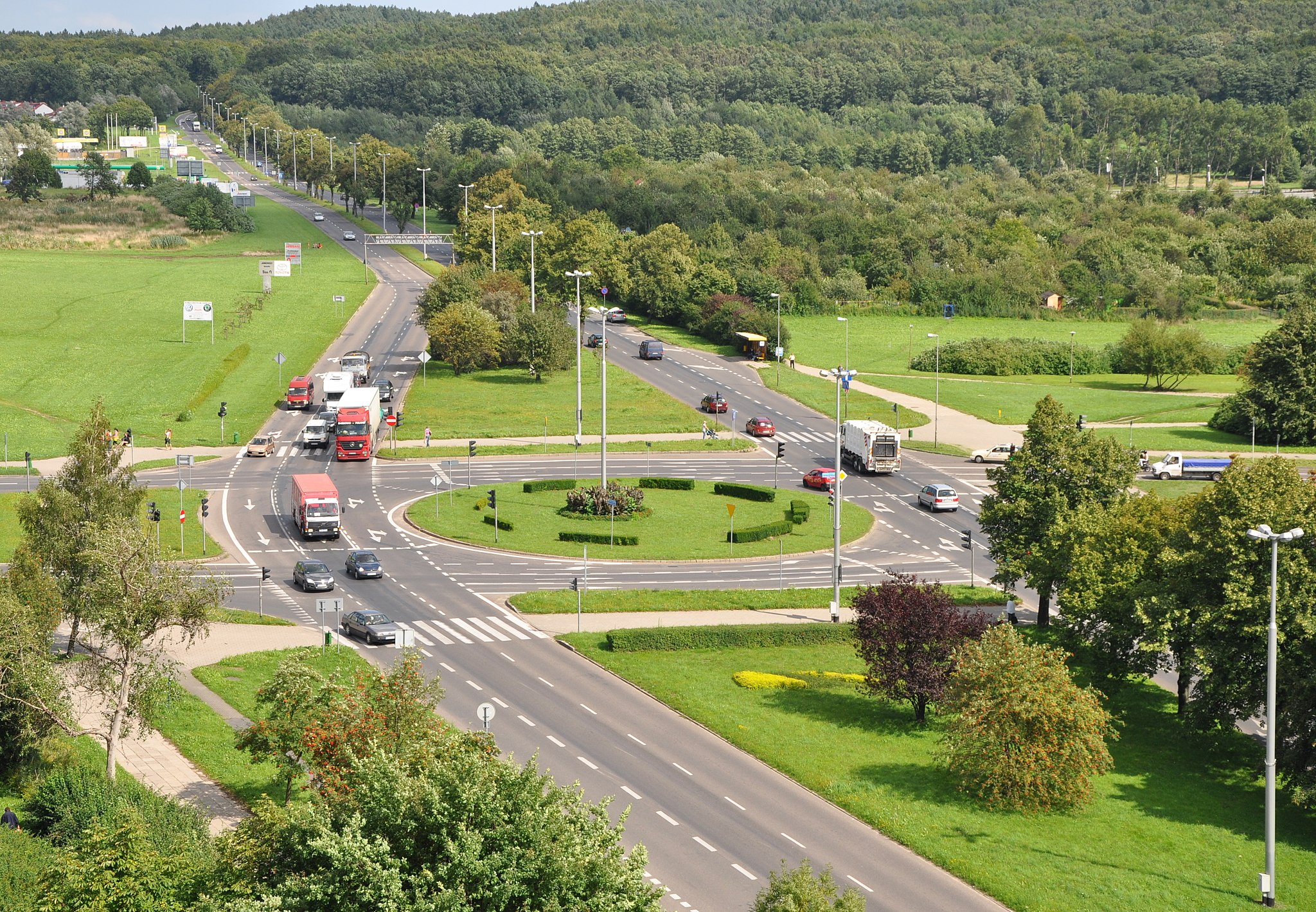 According to U.S. National Highway Traffic Safety Administration, 47 percent of fatal traffic accidents in the U.S. occur in urban areas, resulting in nearly 15,000 deaths per year. That’s more than 40 people dying each day on urban roadways.  If there was a data-driven design for transportation infrastructure that saved lives, shouldn’t we implement it? Data from the Insurance Institute for Highway Safety shows traffic roundabouts reduce the number and severity of accidents.

Roundabouts in the United States

Roundabouts are unusual in the U.S. Among the 4+ million miles of paved roads, there are just a few thousand roundabouts.

There’s a traffic roundabout near the offices of one of my consulting clients. I can’t imagine a controlled intersection with lights or stop signs working at this particular spot. Eight streets of various capacities converge at the base of a steep hill in a residential area.

The intersection is beautiful, as infrastructure in the U.S. goes. A fountain adorns the center. Stately trees and even statelier houses line the edges. A stone staircase descends from the south side.

Whenever I visit this client, I go through the roundabout. It leads to more convenient parking. I’m not sure I follow the roundabout rules perfectly, but it always seems to work.

This one neighborhood roundabout is nothing compared to the city of Carmel, Indiana. For the last 20 years, Carmel has been building roundabouts instead of intersections controlled with lights. This applies to new and rebuilt intersections. They now have 100 roundabouts, more than any other city in the US.

Roundabouts should be part of data-driven design for transportation infrastructure. According to the Insurance Institute for Highway Safety,

“Roundabouts are one of nine evidence-based safety countermeasures recommended by the Federal Highway Administration. Some states, such as New York and Virginia, have adopted ’roundabout first’ policies requiring that roundabouts be considered a preferred alternative when building new intersections or upgrading older ones if feasible.”

Designing roundabouts into our traffic system makes a difference in several ways:

Marketing Roundabouts in the U.S.

If we used data-driven design for transportation infrastructure in the U.S., we would include roundabouts in our cities. Yet we don’t. I see this as a marketing failure in two ways.

As a community, we have failed to accurately price controlled intersections and roundabouts. Roundabouts may cost a little more to initially construct. However, they last longer, need less maintenance, and cause less economic damage to people, property, and the environment. For example, 27 percent of car accidents result in injury, and six percent involve a fatality. Each injury generates hundreds or thousands of dollars worth of medical costs, insurance and legal costs, and lost productivity. The total cost of ownership for roundabouts beats controlled intersections.

We have also failed to promote the benefits of roundabouts. I want to think that if people know of a better solution that costs less, they’ll choose it. The people of Carmel, Indiana clearly got the message and have acted on it for more than 20 years. The Federal Highway Administration now recommends roundabouts as the first choice for intersections. Some states have a roundabout-first policy. Why hasn’t the rest of the US caught on by now as well?

Transit-minded community groups and activists can use the tools in the marketing mindset, including free tools at this blog, and begin promoting roundabouts to their local and state officials. The life, and money, you save may be your own.