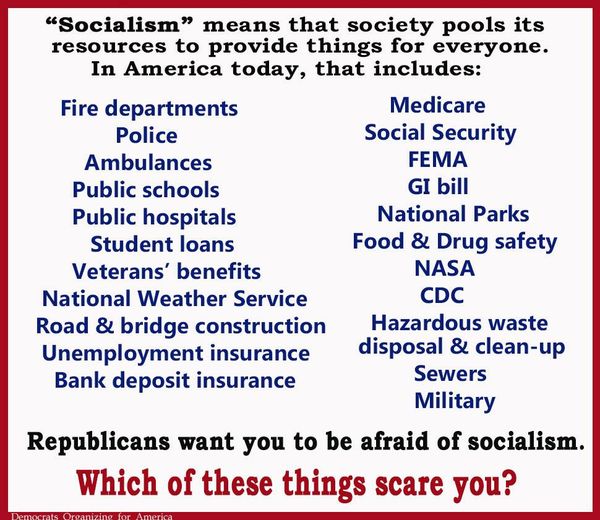 Americans have two very separate views of socialism. We need to learn to talk constructively about both of them.

The social media meme shown above, from the Democrats Organizing for America, lists common public services such as healthcare, education, and transportation under a definition of socialism. The implication of this meme is that providing these services equates to socialism. By extension, the meme implies that we already have socialism in the US, and so voters shouldn’t be afraid when politicians and partisans warn of socialism.

I live in the San Francisco Bay Area, the heart of the liberal Left Coast of the US, and generally support progressive candidates and causes. Still, I think this meme misleading.

Actually, the things listed in the meme are social goods. They are among the products and services that we produce together as a society because it’s difficult or impossible to produce them privately or individually. Social goods have their own challenges when it comes to the core marketing activities of design, distribution, pricing, and promotion (that’s the topic of this blog).

Regardless of political organization and philosophy, every society needs to create social goods in order to survive. Left- or right-wing, settled or nomadic, developed or undeveloped–every human culture produces and maintains some set of social goods that help them survive and thrive in their environment.

What Do Americans Consider Socialism?

The Gallup organization conducted two polls about socialism in the US–one in 1949, and one in 2018. The table below compares results from the polls. 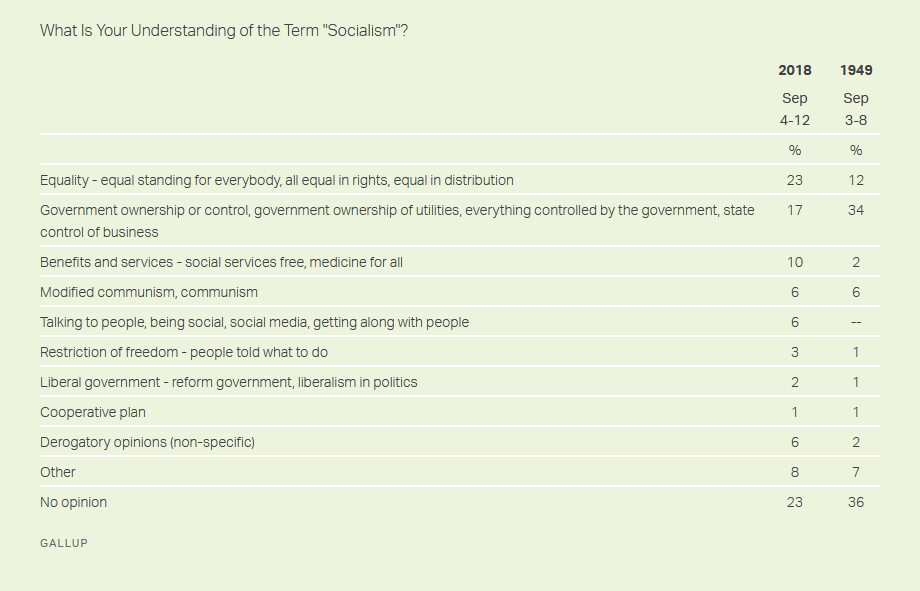 These results show two views of socialism. One view centers on the creation of social goods, with phrases like “benefits and services,” “social services free,” “medicine for all,” “equal in distribution,” and “cooperative plan.” People promoting the meme at the top of this post take this view of socialism.

Another view in the Gallup polls centers on concerns about governmental intrusion and overreach, with phrases like “everything controlled by the government,” “state control of business,” “restriction of freedom,” and “communism.” People sounding the alarm about socialism take this view.

Of course, 1949 and 2018 are two very different points in US history and culture. Still, it’s interesting to note the shift in attitudes about socialism shown in these polls from those years.

Measures of the social goods view of socialism have increased. Among the most common answers, the combined share of answers about equality and benefits more than doubled, from 14 percent to 33 percent. Responses about equality nearly doubled, 12 to 23 percent. Benefits and services responses increased five-fold.

On the other hand, measures about the government power view of socialism are mixed and trending down. Among the most common answers, the combined share of answers about government control and communism declined nearly in half, from 40 percent to 23 percent. Responses about government ownership or control decreased 50 percent.

US culture and politics are very polarized right now. We’re having loud and often uncivil debates about the kind of government we want and the types of social goods we should be creating, providing, and funding. The tone and style of the debates maybe be ugly, but the topics are important.

Unfortunately, we are talking past each other. When progressives want to talk about social goods, often conservatives will counter with assertions about the role and power of government.

For example, some progressives believe that all secondary education should be provided as a social good. They advocate policies such as wiping out student debt and providing tuition-free higher education. Many conservatives counter that the government shouldn’t be in the business of higher education finance. The provision of public education a perfectly acceptable debate to have, and one that we need to resolve so we can have an educated workforce and electorate.

But we won’t resolve this debate, and others like it, when the rhetoric devolves into accusations of unsocial conservatives and overreaching liberals.